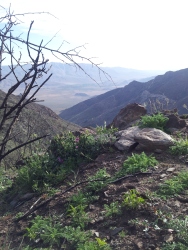 Storm Cyn from the PCT 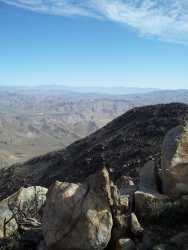 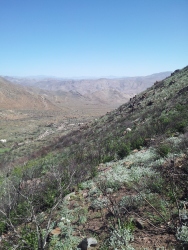 Amphibious life in the desert 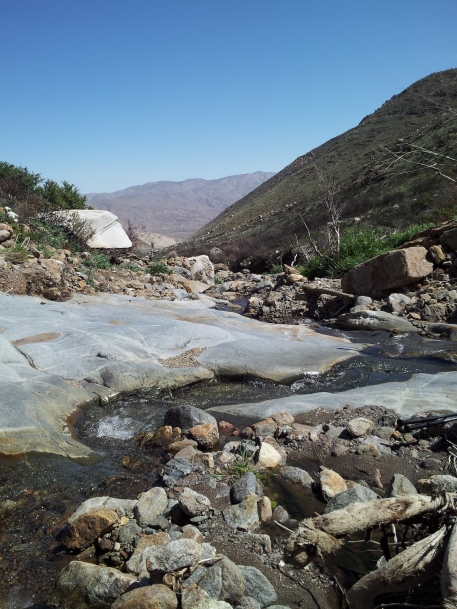 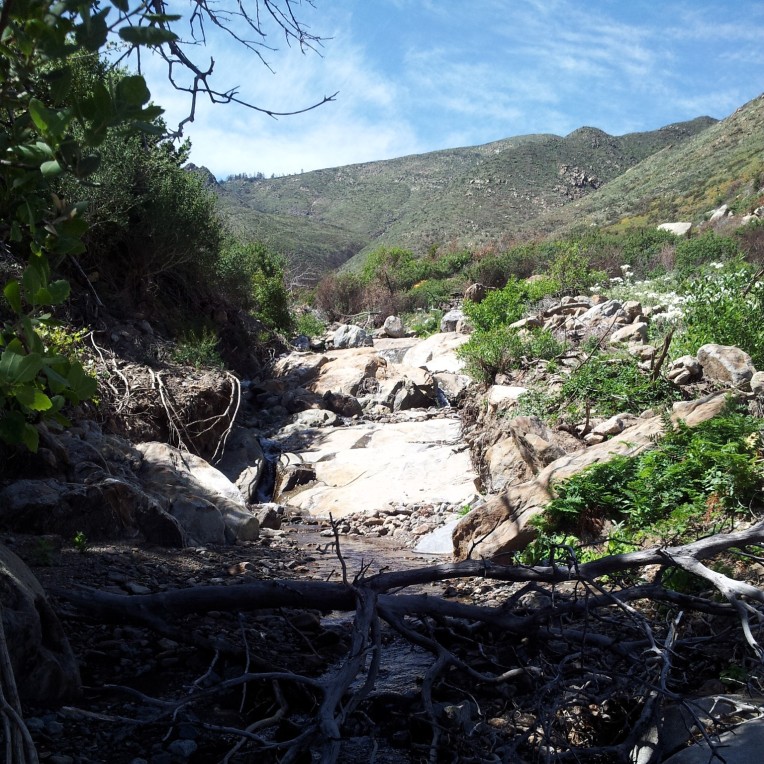 Looking up at Penny Pines from Storm Canyon

This is a reworked Trip Report originally posted on the Anza Borrego Forum on April 12, 2014

Although the majority of this trip was spent in the local mountains, the goal was to spend some time in the desert as well. On sat 4/12/14 I attempted to run up Noble Canyon from Pine Valley to the PCT just north of Monument Peak, drop down the main ridge east to Storm Canyon, ascend the main ridge below Garnet Pk, and return to Pine Valley. Everything was going great until the descent into the desert. By the time I dropped to about 5,000 ft, the sustained wind coming up over the ridge was making it very difficult to remain on my feet. I had a great view of the planned ascent ridge and could see some very exposed rock sections higher up. As I was already getting hit with airborn debris and having trouble seeing (too windy for my glasses), I decided to cut it short and descended a minor ridge directly into Storm Canyon. There was a large Granite outcrop that entailed some thought to downclimb but the Chariot fire had cleared the brush and I found a good line to the valley floor. The stream is flowing nicely and the results of the fire are starkly apparent. There is a large amount of earthen debris in all the chutes and gullies that has been cut through by rains since. There is no brush and many beautiful little waterfalls with ferns, young poison oak, and a large amount of flowering plants as well (+frogs). Looking up, I saw many talus slopes that don’t appear on Google Earth as those images are still pre-fire. This proved to be a bit of a challenge when I first started up the minor ridge south of Garnet Peak and I had to do the old two steps foreward, one slide back dance. The rest of the climb went quick as it was short and I didn’t even need to refill at Penny Pines before returning to my car in Pine Valley.
The Chariot fire has really opened up that water-feature filled canyon and I can’t wait to return, get a little further out towards Agua Caliente, and come back up that steep ridge to Garnet Peak. Beware the skeletons of the brush that has been there my whole life. Although they look like insignificant twigs and sticks, they are really stiff daggers that were fire-hardened while still vibrant and pitch-filled.