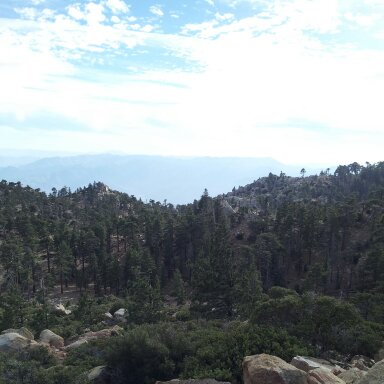 This is a reworked Trip Report originally posted on the San Jacinto Message Board on Feb 25th, 2014

This is the time of year when I am typically able to sneak away for a solo weekend guilt free because I am now a year older. The Santa Rosas beckoned and my plan was ambitious, a trio of remote peaks (Dawns, Martinez, and Toro) involving off trail routing with uncertain water sources. I had it all worked out.

I drove to Borrego Friday night and between working late, family obligations, traffic, and an hour and 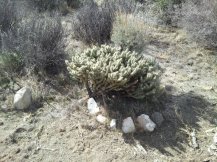 a half of off-roading, I didn’t reach my trailhead until 11:30 pm. This did not bode well. After changing into hiking clothes, I backpacked up to lower Rockhouse Valley where I stashed 3 ½ liters of water for the days first peak (Dawns, about halfway between Toro & Rabbit). I then continued on, setting up camp at about 3:00 am. Even though I often looked, I never saw the cougar that I imagined was surely stalking me in the dark. This thought was not without merit. Several years before, I actually saw a very large cougar on the bank of  a wash in the same area as I passed by at about 2 am and I could see the reflection of its’ huge eyes following about a hundred feet behind me for almost half a mile (the tracks  I saw on the way back out confirmed this, but that’s a whole other story). By the time I set up my tent and readied my daypack for the coming run, it was almost 3:40 am.

It came as no surprise that I slept right through my watch alarm set for 5:00 am and awoke at 8:00 to full sun. This was not good. I knew it would take me at least an hour to run down canyon to my water stash and another hour to summit Dawns Peak. This only left me with 7 or 8 hours to then reach Martinez Mtn and beeline it to Toro. My plan was already tight for time and this late start had totally blown any safety margin. In my mind it was all falling apart. I realized that most emergency situations are usually the result of a series of bad decisions and unforeseen circumstances so I took some time to rethink my day and not make that first bad decision. After much thought and two cups of coffee I decided to have fun and bag Toro, drop down east along the main ridge to the north of Horsethief Canyon until my turnaround time and return via a different ridge to the south. My main problem was that all my water bottles were 7 miles down canyon although I did have my 2 ½ liter camelbak.

t gloves at about 9:30 am. The ridge started out rocky and crumbly but quickly gave way to Manzanita and then trees as I topped out onto the Alta Seca bench. I remember the shelter of large pinyon pine trees along the lower portion of the ridge in the late eighties. I watched them go brown, become skeletons, and eventually topple over. Only the trunks remain now. The rock outcroppings overlooking Rockhouse Valley made for great views as I made my way from one to the next until I got to Toro summit just before noon.
At this point I

decided on a turnaround time of 2:00 given that even though I had extra clothing and a flashlight, I did not yet

know what my return route would look like. It was disappointing that my great adventure had been pared down to two more hours but I was really enjoying being in the trees on top of the world. Heading towards Martinez Mtn (I made it about halfway) was a mix of big pines and low Manzanita until about 6,000 ft where the brush got thicker. I dropped into Horsetheif Canyon and meandered down until it pinched into some large, beautiful (but stagnant) rockbowl pools that I could not downclimb. It was nearing 2:00 so I climbed a ridge to the south and came across some segments of trail leading up west and then south into Black Rabbit Canyon. It was clear that the trail was there long before the bushes and that progress would be very slow and painful from then on.

I then went up Black Rabbit Canyon a short distance and attained a ridge to the south towards a peak at the south end of Alta Seca Bench. Bushes…hours in the bushes, until 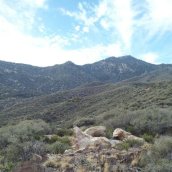 I finally topped out at a peak with a house-sized boulder perched on top. I peeked around in the little caves at the base of it and noticed two deep grinding holes in the underside. To clarify, these were going up into the underside of the boulder. I felt them and the insides were polished smooth. I then climbed around the rock and noticed that all exposed surfaces were evenly oxidized and could find no signs of recent movement at all. Those grinding holes have been there for a long, long, long time! I stood and marveled at the topics that were surely discussed here during the tedium of food prep so very long ago; births, deaths, dreams, stories of far away places…

The descent to Rockhouse Valley was a full-on run. The route used to go from tree to tree but I still remember where a lot of them used to be and made it to camp in under an hour with a liter of water to spare. I made dinner and climbed a small hill with a view of Borrego to eat while watching the sunset and then sweet sleep.
Sunday morning started with exploring side canyons and surrounding ridges until 10:00 when I packed and headed out. The hike/jog back to the vehicle took about two and a quarter hours including retrieving my water stash.
Although I didn’t accomplish anything near what I had set out to do, I didn’t end up crawling back to camp in the dark (or worse) and I absolutely enjoyed the east side of the Santa Rosas even though the bushes are just as fierce as I had feared. Those things suck the time right out of a day! The sheer volume of well-worn trails (unusable due to brush) between upper Horsethief Canyon pools and Black Rabbit Canyon begs to be explored further.